Smoke Off has been held annually on the first weekend in November for several years. This event requires a long lead time to register teams of cooks, obtain licenses and coordinate volunteer input. In addition it relies on the generosity of sponsors and in the Covid 19 environment this is likely to be harder than usual. Because of the uncertainty of the next few months, and despite the relaxing of restrictions, the practical nature of the event would make social distancing very difficult to achieve. Thus it has been decided not to hold the Smoke Off Festival in 2020. 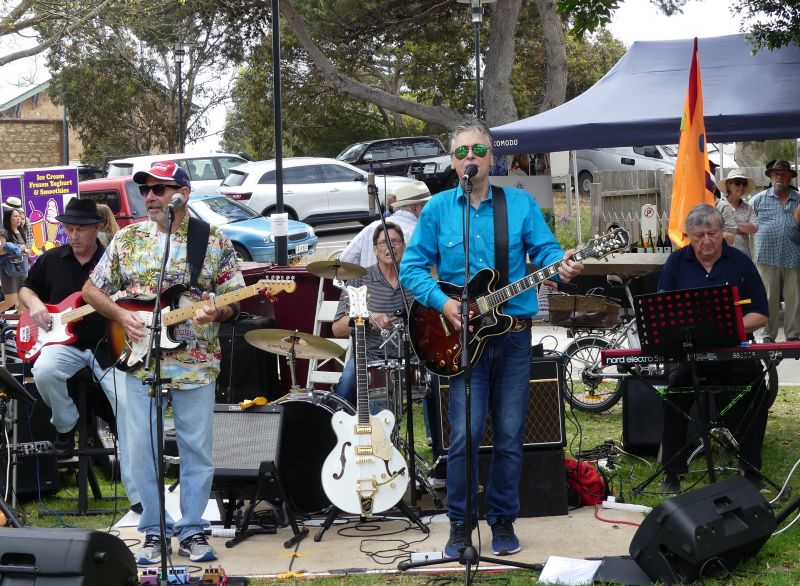 The annual Cittaslow Goolwa Smoke Off Festival was held on Sunday, 3 November 2019.

Music – festival favourites Matt and the Maniacs provided plenty for spectators and dancers alike, while Langhorne Creek wineries Bleasdale, Karrawatta, Next Crop, Vineyard Road and Kanoetree were kept busy with sales by the glass and bottle. A wide range of tempting and delicious foods were provided by Big Mahalo Hot Dogs, Urban Edibles, Primal Bliss, Fleurieu Ice cream and FroYo plus not forgetting Ralphbull the Coffee man.

The whole event was compered by regular MC Ian Wright, a prominent radio figure in the Fleurieu.

A key part of the Festival was the annual Smoke Off competition itself. This involved a number of teams using barbeques or gas smokers to smoke a ham or other food in a competition that would see teams judged the best on the day in three categories. Food judges were experienced chefs Michael Duchow and Stephen Roney with Greg Kuerschner who has 25 years experience in hospitality. Aside from the food contest, teams competed in a competition for the title of best theme which was judged on the creativity and presentation of the marquee-based team entries. This section of the competition was judged by local artist Mike Tye and Lachlan Kelly from the Southern Fleurieu Film Society.

After a lengthy examination of the competing entries, the winners were announced. Winning team in the Ham category was the Green Eggs team while the team from Goolwa local radio station Alex-FM came in second, with only half a point between the teams. The Open category was won by the Master Basters team just one and a half points in front of the Goolwa Community Bank. In the Theme category, the Goolwa RSL was successful, in front of the Goolwa Community Bank.

The bumper Smoke Off raffle was drawn on the day with the first prize of a stand-up Hark gas smoker donated by Goolwa Stratco going to Angie Toone of Goolwa. All prizewinners will be contacted. Proceeds from the raffle will be divided among the Currency Creek CFS, Cittaslow Goolwa and local Goolwa community organisations.