You missed a great event!

The 2014 Goolwa Smoke Off was held on Saturday 22 November in the Garden of Remembrance, Signal Point Goolwa. This popular annual event was presented by Cittaslow Goolwa supported by the Alexandrina Council, Shaw Family Vintners, Goolwa Central Meats, and Alexandrina Cheese.

This was the sixth time that the Goolwa Smoke Off has been held and the event provided a treat to the eye and to the taste-buds with eight teams smoking a variety of foods including ham, fish, goat, sausages and lamb in their Weber BBQs. Teams were dressed in festive costumes and housed in elaborately and colourfully decorated marquees. 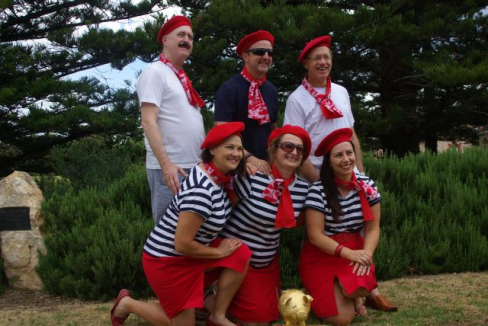 Cittaslow Goolwa, event organisers, believes that Smoke Off sits well in the organisation’s philosophy which centres on supporting good local food and wine producers and the community generally.

In addition, each team’s site was assessed by Lyn Clark, Cittaslow Goolwa President. Lyn’s criteria were concept, presentation and creativity. In addition, Lyn factored in signs of commitment to Cittaslow principles. The winning team were all neighbours from the one street.

A raffle was conducted in conjunction with Smoke Off. The raffle prizes included a barbeque donated by Kies Family Timber and Hardware, a wine fridge donated by Shaw Family Vintners, and vouchers donated by local cafes Aquacaf, Rankines at the Whistle Stop, Hector’s on the Wharf and Bombora.

On Friday 5th December cheques were presented to Ms Lyn Clark, President of Cittaslow Goolwa, Captain Barry Burt of the Currency Creek CFS and Mr Bob Plummer, President of the Goolwa RSL. The presentation was made by Mr Scott Woodsmith of the Cittaslow Goolwa Food and Wine Group, the co-ordinator of the event.

The donation of funds to the organisations was gratefully received and will assist them to continue to support the Goolwa community. 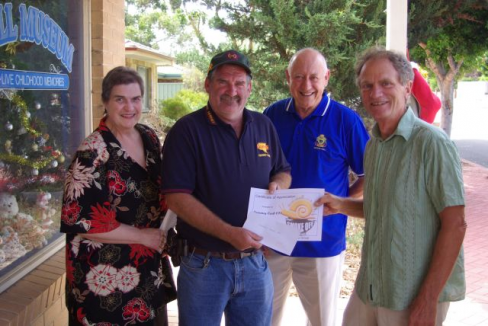