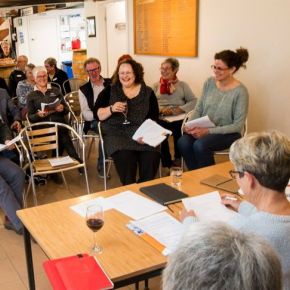 The Cittaslow Goolwa Annual General Meeting was held on Thursday, 16 November at the Goolwa Aquatic Club. President Margaret Gardner thanked all members and, in particular, the Management Team, for the exceptional level of involvement during the year.

Margaret reminded those present that Cittaslow Goolwa has no paid employees – all involved are volunteers.

2017 has been an outstanding year for the organisation. Cittaslow Corner, the new home of Cittaslow Goolwa, was opened by the Alexandrina Mayor in February providing a showcase for all things Cittaslow plus a wide variety of local produce and artifacts. The 10th birthday celebration of Cittaslow Goolwa in March was followed by the International Assembly in May, the first held in the Southern Hemisphere and considered by many to be the best. The popular At The Wharf events continued to attract large crowds to the Wharf precinct. The Community Garden is soon to be joined by a Fruit Forest in Neighbour Park. In October, the Farmers Market celebrated its first anniversary and continues to grow.

The President paid tribute to John and Lyn Clark, Edward Booth, Jan Henderson and many others for their enormous energy over many years that led, firstly to the formation of Cittaslow Goolwa and then to the establishment and development of what is now an increasingly significant part of the Alexandrina Council area.