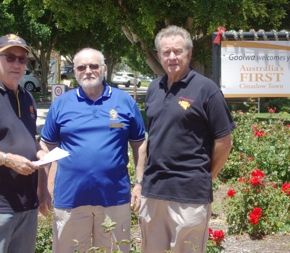 2017 marked the holding of the ninth Smoke Off and as has happened since the very beginning, proceeds from the Raffle conducted in conjunction with Smoke Off were donated to the Goolwa RSL and Currency Creek CFS.

The Smoke Off Festival is a fun event that involves teams of local residents dressed in spectacular costumes smoking hams, seafood or other tasty foodstuffs in Weber BBQs or other devices. This all occurred at the Garden of Remembrance, Goolwa on Sunday 5th November 2017. The food was assessed by local food identities with those judged the best on the day receiving trophies and prizes.

On Tuesday 19th December the cheques were presented by Mr Ken Smith of Cittaslow Goolwa to Mr Bob Plummer, President of the Goolwa RSL and Mr Dennis Rogers from the Currency Creek CFS. Cittaslow Goolwa is the co-ordinator of the Smoke Off Festival which is an annual event aimed at assisting to make Goolwa the best place it can possibly be to live in or just to visit. This year’s event appeared to involve a higher number of visitors from Adelaide and the metropolitan than in recent years.

The donation of funds to the organisations was gratefully received and will assist them to continue to support the local community.

The fun of Smoke Off was supported on the day by local food and wine providers, including major Langhorne Creek wineries. Popular local band, Suzi and the Jetz , provided some great dance music on the day and will return to the Goolwa Wharf Precinct to be part of the At The Wharf event on Friday 29 December.

Mr Smith, said “In line with the Cittaslow principle of supporting the local Alexandrina community, it was great that the event reached out to Langhorne Creek and attracted spectators and participants right across the Council area.”