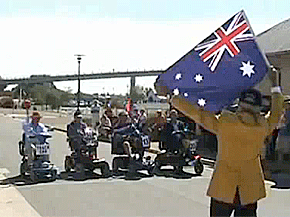 2012 Cittaslow Goolwa Gopher Festival was held on Saturday 3 March in the car park behind the Alexandrina Council and the Goolwa Medical Centre. See the Festival events on YouTube - https://www.youtube.com/watch?v=gMWIlqe151M

Peter Goers of the ABC compered the day, with Edward Booth calling some of the obstacle events. Glen Dix, the legendary Adelaide Australian Grand Prix Flagman added colour and spectacle, while Peter Cannon ran the music on equipment supplied by Roxy Sound of Victor. Our own official recordist was Liz Hobbs, who circulated with a video camera.

There were 27 contestants, of whom about half were local gopher users. There were enough to run nearly every scheduled event, and one event ran to three heats.

The lap events were popular. Jack Young of Goolwa took out the over 80s with Dominie Whyntie bringing up a game second. Dave Schubert came home in the 71-80s event with a blistering 1 minute 57.4 seconds.

In the third race (for 51-70), Peter Goers was disqualified for going in the wrong direction, while Harry Meuris set a scorching 2:06.66 (a new track record).

Records continued to fall when Clinton Carter came home in the junior (under 50) event. His time was 1 minute 50.48 seconds.

The obstacle events were well contested, with nearly every entrant having a go. The older riders acquitted themselves well, and spectator interest was high, with cheering and high spirits. The event showed that size and speed were not necessarily the greatest assets, with some of the three-wheelers giving sparkling performances. However, it was Clinton Carter who again took out the fastest time of 38.05 seconds. Dominie Whyntie put up a creditable 58.43, which showed a few younger riders how to do it.

After lunch, the concourse d’elegance was held and won by Dominie in her lovely old three-wheeler. The worst taste was won by Sandy Weeks, who wore a gold jacket on a motorised Esky! Pretty hard to beat that! She even had her own supply of mini-cham on board.

Lunch for contestants was served in the Hospitality Tent, where talk naturally turned to exploits on the track. The Royal Flying Doctor South Coast Support Group prepared the lunch, as well as supplying tea, coffee and cake to the public throughout the day. The Friends of the Oscar W ran a sausage sizzle on the wharf, as well as running cruises on the river.

The crowd was entertained with a demonstration dragster gopher run reaching about 60kph at the end of a 70m drag. It showed what amazing power can be extracted from tiny gopher motors.

The competition then ramped up with the open class, standard gopher event over one 437m lap. There were so many entrants that three heats of five gophers each had to be run. The event was taken out by Sandy Weeks on her Esky with a time of 1:42.81.

The Relay fielded three teams of three riders each, and featured a Le Mans start (riders off their gophers). The event required the team to relay a bag of groceries around the lap without breaking any eggs or squashing any tomatoes. The groceries had to be taken from a checkout counter to a shopping trolley. The event was won by a combined team from APIA and BlueSky Mobility in a leisurely 2:35.16.

The final event for the day was the Formula 1 Gopher Prix. There were two entrants; Scott Woodsmith driving a Fiori, and Edward Booth on a Renno raced for the top honours. The Fiori was far too good for the Renno, and set an average lap speed of 22.08kph; lap time 1 minute 11.25 seconds.

The day was a great success, and turned a small profit against all expectations.

The organisers express their gratitude to all the helpers, drivers and spectators who made it such a success. Special thanks to Peter Goers and Glen Dix who added so much colour to the day.

Comment after the event supported another event of similar nature.

Finally I must acknowledge our financial sponsors/supporters:

The next Cittaslow Goolwa Gopher Festival will probably be in March 2016 in the car park of the Alexandrina Council, Goolwa.