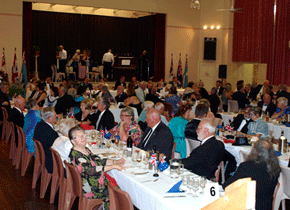 In February 2010, Cittaslow members organised the period dinner marking the 180th anniversary of Captain Charles Sturt first arriving in Goolwa. A 4 course meal with 14 toasts was held in Centenary Hall. It was great fun for all. Guests included the Governor of South Australia, the British Military Attache, the British Consul to Adelaide and the District Police Commander for Adelaide Hills plus local politicians and councillors.

The following day, Sturt's arrival in a whaleboat was re-enacted by one of his descendents before a crowd of local school children and members of the Goolwa community. A cairn was unveiled to mark the occasion. Aboriginal Elder Tom Trevorrow gave the welcome to country and provided an indigenous insight into early explorations. The children from the Goolwa Primary School provided music and dancing demonstrations. Cittaslow Goolwa assisted with the publication of "The Visitor" a book about Sturt's return visit to Goolwa to search for his original campsite.