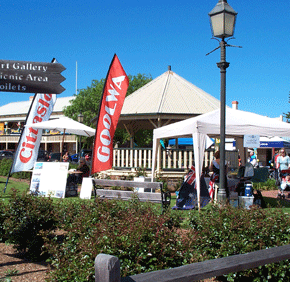 Between 2005 and 2013, the Sunday of the October Labour Day Long Weekend in South Australia, the Community of Goolwa celebrated the new spring season with GOOLWA ALIVE, a community street market. This event was awarded the 2012 Australia Day Community Event of the Year by the Alexandrina Council. The Fleurieu Food producers were a feature of this community event. The main street of Goolwa was closed to vehicular traffic for the day and was claimed by community groups, entertainers and thousands of locals and visitors. Activities were also held in Signal Point and the Goolwa Wharf area. The paddlesteamer Oscar W celebrated its birthday that weekend too.