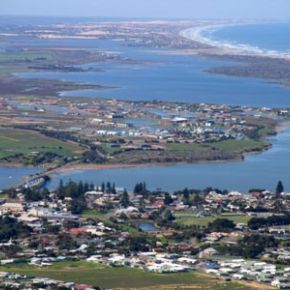 Cittaslow Goolwa was part of the redeveloped Signal Point at Goolwa Wharf. Currency Creek wine producer Shaw Family Vintners (formerly Ballast Stone Estate Wines) has brought new life back into this significant building that was orginally set up as an interpretive centre and opened by the Prince and Princess of Wales in 1988. Stage One of the new development includes a cellar door, Cafelicious, Currency Creek Wine Makers and Cittaslow Goolwa. Regular cultural displays are now a feature of Signal Point.

You can purchase jams and chutneys made from seasonal produce grown at the Cittaslow Goolwa Community Garden. A display of Cittaslow activities are shown on the television screen at Signal Point.

The official re-opening of Signal Point was on Friday 18 February 2011 with a Stomp Off.

If you want to look at the webcam view of the River Murray and Goolwa Wharf from Signal Point click here.

You can spend time exploring the historic river port of Goolwa, eat at Hectors on the Wharf, ride on the Cockle Train with Steam Ranger and the paddlesteamer Oscar W, wander around the Goowla Wharf Market every first and third Sundays, plus lots more. Find out details from the Goolwa Visitor Information Centre on the corner of Cadel Street (the main street) and Cutting Road.